Responsible for this content
BBC Countryfile Magazine
Andrew Hayward
on the December 28, 2020 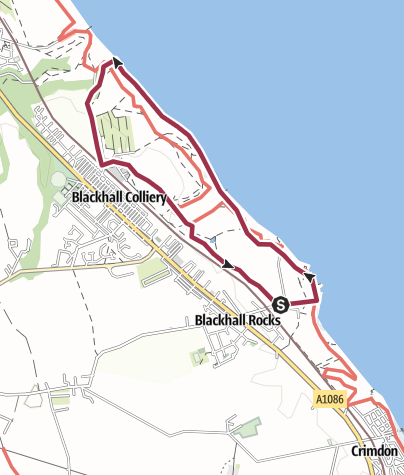 The 1971 film Get Carter, one of the finest in the British gangster genre, paints a grim picture of the north-east of England. Not least among the memorable set pieces is the climactic scene, filmed at Blackhall Rocks, in which tons of colliery waste are being dumped on to an already filthy beach. The 1980s saw the closure of Blackhall Colliery and a clean-up of the beach, which has since become part of the Durham Coast National Nature Reserve (NNR). Seaham, a few miles to the north, provided the setting for the start of Alien 3 (1992), and Redcar, a similar distance south, became a convincing
stand-in for Dunkirk, in Atonement (2006).

(Start) Follow the footpath from the car park toward the beach, then turn left and continue along the top of the cliffs. The rocks are magnesian limestone, laid down by a shallow sea 250 million years ago as it washed over carboniferous deposits. They were later mined for coal. The soils here encourage an abundance of flowers that adorn the cliffs during spring and summer, and attract many butterflies, including the rare
Brown Argus.

A slight detour leads over a narrow valley and up steps. Continue to a second car park and follow a concrete staircase down on to the beach. As you continue north along the beach, you will pass some small caves in the cliffs. Many of the rocks beneath the cliffs are stained a rusty brown by iron oxide deposits, while a closer examination of black streaks along the beach reveals them to be small rounded pebbles of coal.

(1)Continue past a second small dene, at the base of which is a shallow brackish pool fed by springs from the limestone. Wading birds often leave their footprints in the mud at its edges.

The beach continues until the cliffs open out at the mouth of Castle Eden Dene, the largest gorge on the Durham coast, and an important NNR in its own right.

Turn left on to this and follow it past a series of allotments as it converges with a railway line on your right.

(3)On reaching the railway bridge, turn left into the industrial estate. At the first junction, turn left again out of the estate then turn right on to a narrow, well-used footpath. The industrial estate and the land you are now walking on were the site of Blackhall Colliery, the source of the conveyor belt and spoil heaps that contributed to making the final scene of Get Carter so memorable.

The path continues through small patches of woodland and open areas of grassland until it joins the road from Blackhall Rocks, next to another railway bridge. Turn left here, and continue for 200m to return to the car park.

how to get there

By car: Follow the A19 between Newcastle and Middlesbrough. Turn east on to the B1281, south of Peterlee, and continue to a junction with the A1086. Turn right (south) to Blackhall Rocks and after ½ mile, turn left on to a beach road. After the railway bridge, take the right fork to the car park.