Responsible for this content
Rob Wilkes
Ben Cowie
on the July 25, 2021 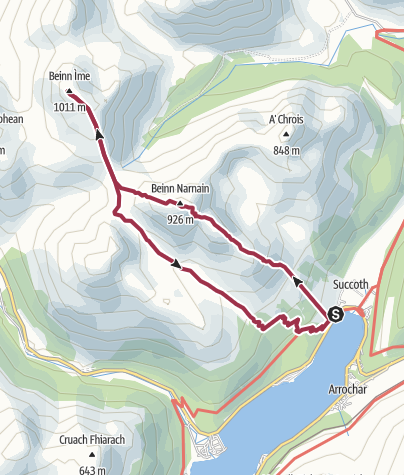 The compact group of mountains known as the Arrochar Alps are renowned for their steep, rugged and rocky nature. However Beinn Ime has a simple slope when approached from this direction. Beinn Narnain has a much rougher and rockier character. The views - esp of the nearby Cobbler - are excellent.
difficult
Distance 13.1 km
Duration5:28 h
Ascent1,252 m
Descent1,253 m
Highest point983 m
Lowest point13 m

Start from the Forestry Commission car park (charge) at Succoth on the north side of Loch Long near Arrochar. From here cross the main road and follow the marked path opposite through the woods. This is the main route to the Cobbler. After a very short distance turn right up a faint path through the undergrowth. The path soon becomes clearer and starts to climb steeply; it is often very wet after rain. The trees are left behind and the climb continues past a series of concrete bases which are remains of the hydro project here. When a track is reached, go straight across it and continue on the rugged path over a rocky step. There are good views back down to the loch and Ben Lomond beyond.

Higher up, a path traversing the side of the hill is reached. Although the OS map shows the route up Beinn Narnain turning left here, the main route continues straight on, bearing slightly right at first and then continuing the climb up rough ground. There are a couple of easy rocky scrambles and a boggy area where the path is faint on this next section. After the next steep section of ascent, the Cobbler can be seen to the left.
There is a brief flatter section before the continuing ascent to Cruach nam Miseag. There is a brief descent before reaching the prominent rock buttress of the Spearhead. The route, on a small path, is to the right of the main buttress and follows a rock-filled gully with no difficulties. The final section to the summit is across easier ground, with a clear path to the trig point.
There are good views to the Cobbler, Beinn Ime and the wider hills beyond. From the summit continue west north west across the stony plateau to follow the path descending towards the bealach. The descent is steep in places where the path is a little eroded and on the lower sections the grassy ground can be boggy.
Beinn Ime is now seen straight ahead. Although a steep and rocky mountain from most viewpoints, the ascent from this side is up a broad and somewhat soggy slope, though there is a path. The ascent is a long one, with almost four hundred metres to gain from the bealach; it ends at the trig point at 1011m - the highest summit in the Arrochar Alps. Return back the same way to the bealach.
Bear right at the bealach to traverse across to the slightly lower bealach between Beinn Narnain and the Cobbler. Here there is a clear junction of routes; you can choose to detour up the stepped path to visit the summits of the Cobbler, or you can turn left and continue the descent. The down path has been vastly improved in recent years and is dry and easy going underfoot. Follow the route downhill, ignoring the junction to the right part way down where another path descends from the Cobbler. There are great views of its strange rock architecture from here.
Two giant blocks of rock known as the Narnain boulders are passed; some of the early Glasgow climbers used to sleep here during the exploration of the Cobbler's cliffs. The path now runs alongside the Allt a' Bhalachain, crossing side streams on large stepping stones at times. Shortly after passing the small hydro dam on the right, there is a junction with a faint path that traverses the slope to the left. Continue straight on, on the main path which starts to descend through the trees. When the path reaches a track near a mast transmitter, turn left and then right at a bench to follow a zig zag path down through an area of felled trees heading towards the Loch. Eventually the path emerges back on the main road opposite the car park.