Responsible for this content
Phil Wright
Donald Menzies
on the July 17, 2021 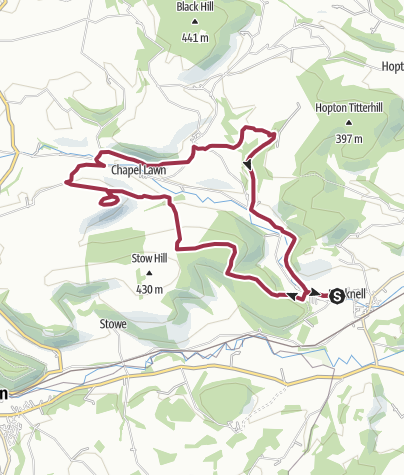 Leave the Baron of Beef and turn R onto Chapel Lawn road, then R again into Bridgend Lane. After a short while you join the river Redlake on your L. Walk as far as a house called “Seabridge”. Turn L and cross the footbridge over the river, then cross the road and walk along the forest track ahead. A short distance further on you reach a T-junction marked by a Forestry Commission sign saying Bucknell Wood, where you turn R.

Walk along the forest track, past a black-yellow barrier, until you reach a lay-by on your L. Bear L here and go past the gate onto a pleasant stony path. Follow this gently uphill, passing one bridleway and crossing another. After ½ mile a major track joins from the L.

Continue straight on for about ⅓ mile until you reach a deciduous clearing with a glimpse of views through the trees to your L. Resist the temptation to turn R at the first junction. Instead, carry on a little further and follow the track as it curves R uphill.

As you gain height, forest clearing reveals open views to your R. Bucknell is spread out below you. To the L of Bucknell are the wooded slopes of Bucknell Hill and Hopton Titterhill, whilst behind Bucknell on the skyline is Titterstone Clee Hill (with its white radar dome). The village in the Redlake valley beneath you is Chapel Lawn. In the distance is the Long Mynd, while further L you can make out the rocky top of the Stiperstones.

After another ¾ mile the forest track comes to a gate, through which you step onto the open grassland of Stowe Hill.

As you step onto Stowe Hill your goal is the gorse-covered ancient hill fort of Caer Caradoc directly ahead of you. Keep to the track and make your way across the field. Don’t go through the gate, but instead turn R and follow the byway downhill through two gates. Here, you leave the byway and immediately bear L through another gate.

Walk down the field towards some buildings in the valley below, keeping close to the hedge on your L. The path goes steeply downhill, over a stile and along by the hedge to another stile in a field corner, hidden behind a large holly tree. Follow the sunken path between more holly trees as it bends first L and then R, to a boggy area where it crosses a stream and goes through a gate. Ahead of you is “Squire”, a house with a collection of holiday cottages. Walk up between the buildings and leave the estate by iron gates, where you turn L onto a road.

Walk up this road towards Caer Caradoc. Just after the road bends L past some electricity poles, go through the kissing gate on your R (signposted Caer Caradoc). Continue up past a house and through some deciduous trees to another kissing gate. Ignore the stile above you and take the grassy path all the way up the side of the hill (about ½ mile) to a third kissing gate.

Turn back L and follow the direction of the finger post on a gently rising traverse to another gate. You are now entering Access Land (right to roam). Go straight ahead and follow the thin path as it contours around the east side of the hill, then turn R steeply uphill when you can see a convenient gap in the gorse. As you approach the top a gap in the ditches leads you to the summit.

You are now at the high point of the walk. Looking west, Beacon Hill is visible on the skyline, across the Teme valley in Wales, and to the L of it is the broad top of Black Mixen, with its central mast. To the north is the rounded shape of Corndon Hill.

Closer to home, try to imagine what it might have been like, stationed on this bleak, windswept hill two thousand years ago, in the days before goretex, waiting for the Romans to arrive. This was the fate that befell Caradoc, whose named is perpetuated in this lump of earth and stone (for historical footnote, see below).

When you’ve soaked up the view, simply retrace your steps to point F. Alternatively, you can continue your direction across the top of Caer Caradoc and through the ditches on the west side. You then come to a gate. Unfortunately the field beyond is not Access Land. To get off the hill you therefore have to turn R at this point and skirt back around the north flank of Caer Caradoc. To do this, climb out of the last ditch onto the bank immediately to the R of the gate. Staying within touching distance of the fence to your L, contour around the hill until you come to the last kissing gate you went through on the ascent. Turn L here and follow the path back to point F.

Go straight ahead, keeping close to the bottom of each field, as the route takes you through three more kissing gates and onto a road. Turn R and go steeply downhill for ½ mile to a junction, where you turn L. Walk along by the river Redlake, round a bend in the road and turn R at the next junction.

Ahead of you are the houses of Pentre. Go up the road and turn R past the first stone cottage. Take the left-hand track and follow it to the garden of a house. Bear R through the small wooden gate and continue on a delightful path for 1 mile along the edge of Brineddin Wood (in the Middle Ages this wood was divided into narrow strips called quillets, bounded by mere stones. The quillets survive to this day). In spring the path is bordered by primroses and wood anemones, and a little later on by bluebells.

On your R open fields lead down to the river Redlake, with Chapel Lawn stretched out beyond. You eventually emerge from the wood via a gate and continue directly across a field to a stile. Cross the stile and turn L onto a road.

Go up the road towards the houses of Pentre Hodre. At the next road junction turn R by a pond, signposted Bucknell 2¾ miles. Carry on down this road for 240 yds and take the first gate on your L onto a sunken path. This next section can be a little tricky to negotiate, with the path becoming overgrown in the summer and rather muddy and damp in wet weather.

Make your way as best you can downhill through two more gates. At the bottom the path bends L, crosses a boggy area and meets a stream. Pick your way across the stream and pass through the gate. Scramble out of the valley, over another boggy patch, onto the open grassland beyond.

Ahead of you is a wood, and to your L is a large grassy hill. Turn half L and walk uphill, aiming for the gap between the top corner of the wood and the grassy mound. As you get near the top of the slope, head for the corner of the fence that surrounds some trees on your L. Carry on alongside this fence and you will soon see three gates.

Go through the middle gate, turn R, and then walk up the field about 140 yards. Look out for a stile in the hedgerow on your R, which takes you into the field beyond. Strike out across the field, aiming for the topmost electricity pole on the far hill (single file through the crop!). This should take you directly to a stile on the edge of the fir wood at the far side of the field.

Climb over the stile and walk down through a gap in the fir trees. The path may be indistinct here, but bends L in front of a fence and then goes down past a large oak tree (ignore a small padlocked gate on your R). Cross the stream at the bottom by the small plank bridge, and go over the stile to join a track by some security gates.

Follow this track down by a stream to some ponds. Clamber over a stile into a sloping meadow, and keep a level route across the middle of the field to another stile on the far side. Go across this stile and then go half L uphill for a few yards. The path then levels and carries straight on for a short distance before dropping down half R through more broom and brambles, past a large oak tree on your R to a fence.

Walk along close to the fence to a stile in the field corner. Climb the stile ahead of you, cross an ancient cattle grid and resume a gradual descent on a clear track. Carry straight on through a series of gates and barriers, ignoring a track going uphill on your L, and eventually cross a scrap yard to reach the Chapel Lawn road.

Turn L onto the road and follow it for about ½ mile. Where the road bends sharply R, go through the gate on your L. Bear R and take the grassy bridleway uphill, through a gate and past a line of redwoods on your R.

Swing R past these trees, through a gate and keep to this bridleway as it contours

round the base of Bucknell Hill. The river Redlake joins you from the R, although initially the path maintains its height above the river. After a little while you reach a field gate. Go through this gate and along a path to join the road by a cottage.

Go through the gate and walk down the road for about ½ mile into the village of Bucknell. You emerge at a road junction with the pub immediately on your L.

This hill is a splendid example of an iron age hill fort, with its multiple ramparts and rock-cut ditches for defence. It is named after Caradoc, who was a king of the ancient Britons, and who chose Shropshire as his centre of resistance against the Romans. Nowadays this area is famed for its romantic beauty, but I expect poor old Caradoc (or Caractacus, as the romans called him), had other things on his mind when, in 52 AD, he was defeated in a fierce battle with the romans. His brother was killed and he was captured and taken to Rome, where he remained in exile. The present hill exactly fits the description of the battleground recorded by the roman historian Tacitus. Armchair historians would have us believe that the river Redlake in the valley below gets its name from this bloody event. This seems unlikely, however, as early 17th century maps show it as the river Bradfold, so perhaps the name Redlake stems from the English Civil War (1642-51)? Confusingly, there is another similarly named mound just to the north of here, and no doubt the residents of Church Stretton are equally prepared to do battle to support their connection with long lost royalty.
Difficulty
moderate
Technique
Stamina
Highest point
392 m
Lowest point
149 m