Responsible for this content
Tam Brown
Jade Amateur Walker
on the September 20, 2021

Great walk just be prepared for very steep inclines and ... 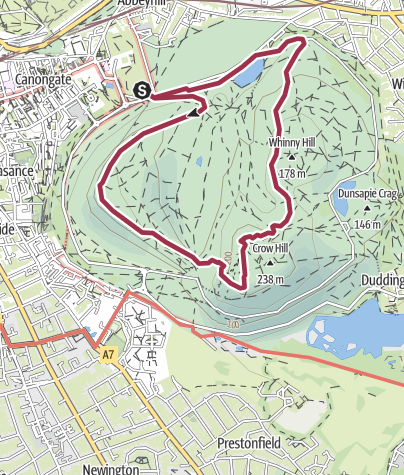 Experience a proper hill walk in the heart of the city. Arthur's Seat's rocky summit towers over Edinburgh, with fabulous views in all directions, and the extensive parkland surrounding it is an oasis of calm as a retreat from the busy city.
moderate
Distance 4.8 km
Duration1:15 h
Ascent255 m
Descent255 m
Highest point228 m
Lowest point37 m

Arthur's Seat is the highest of a group of hills, formed from the remains of a volcano, that make up Holyrood Park. The summit is 251 metres high and surprisingly rocky and wild for a hill in the centre of a major city. Although it is popular, it still feels like a real get away from it all place. This description starts from the car park just south of the Scottish Parliament on Queen's Drive. To reach it on foot turn right if facing outwards from the entrance of the Scottish Parliament building and follow Queen's Drive to reach the small roundabout. The parking area is on the left. From here cross Queen's Drive to head towards the grass of Holyrood Park.

Unless wanting to avoid rougher ground, do not take the diagonal path heading up the right side of Salisbury Crags, the long escarpment facing the city, but instead take the main walkway aiming slightly left and heading for the back of the Crags. (The diagonal path, the Radical Road, passes under the Crags and avoids a short rocky steep section before joining up with this route between the Crags and Arthur's Seat) This starts to head up a wide gap between the two lines of crags. When a narrower path leads off to the left stay on the main path. Very soon bear right onto a grassy path heading fairly steeply uphill aiming for the top edge of Salisbury Crags. From the edge there are great views down over Holyrood Palace, the Scottish Parliament, the white roof of Dynamic Earth, and further afield to Leith and the Firth of Forth.

Keep following the edge of the escarpment as it climbs steadily. Take care near the edge as accidents have happened here. There is a good view east to the summit of Arthur's Seat usually with the figures of those at the top silhouetted against the skyline. Salisbury Crags were formed when the remains of the volcano from which all of the hills in Holyrood Park were made, was eroded by a glacier. The exposed edge of the basalt crags led to the modern understanding of geology following their study by James Hutton. The volcanic action responsible for these hills and the one on which Edinburgh Castle stands took place about 350 million years ago.

Keep along the top of the crags until the end can be seen ahead. Do not continue right to the end as the descent is rocky and difficult. Instead take a path (sometimes muddy) slightly to the left to descend to the path below where you bear right to join the path coming up in the middle of the two sets of crags. Cross to the main path of steps zig zagging up the steep slope of Arthur's Seat. The climb is steep but relatively short and rewarded with great views in all directions. The old, eroded, path can be seen in the cleft in the middle of the hillside.

Keep on the main path as it curves round the side of the hill and then bear left to reach the dip before the final rocky ascent to the summit. At the very top is a trig point and panoramic views of the city and along the coast to the east to the Bass Rock to enjoy. From the top descend eastwards to soon pick up a path with a metal chain railing. Once at the bottom of the steep section a number of paths lead off in different directions. This route takes in the lesser visited Whinny Hill straight ahead, so continue on the grassy path which climbs gently.

Follow the main path along the top of the lumpy ground, with great views to Leith straight ahead. Keep following the main path through clumps of gorse until it bears slightly to the right and starts to descend with St Margaret's Loch visible to the left. The path eventually emerges onto Queen's Drive. Turn left to follow it past the loch, popular for feeding the ducks, and straight back to the car park at the start at Holyrood.