Responsible for this content
Zum Wohl. Die Pfalz. Verified partner  Explorers Choice
The Hinkelsteinweg is a circular trail connecting the path network in the peripheral areas of the biosphere reserve "Pfälzerwald" with the hiking area of the Donnersberg and the predicate trail "Pfälzer Höhenweg". Along the route there are a large number of menhirs as well as historical boundary stones dating back to the times of the Otterberg Monastery. The trail leads past the edge of the nature reserve "Mehlinger Heide ', one of the largest heathlands in southern Germany. The trail takes you along unspoilt forest trails which invite you to dream as if you were in a different world, impressive views and a varied landscape.

From the Drehenthalerhof (from both directions), it is possible to hike along the Hinkelsteinweg in two stages (20 km and 23 km).

Open
moderate
Distance 41.6 km
Duration10:45 h
Ascent500 m
Descent500 m
Highest point417 m
Lowest point245 m
Mighty rocks, flowering heathlands and an exciting history. The Hinkelsteinweg connects the trail network in the border area of ​​the "Biosphere Reserve Palatinate Forest" with the Donnersberg and the Pfälzer Hohenweg. Starting point of this nearly 40 km long tour is the Otterberger abbey church. Through the historic old town and along  the city walls, the trail, marked with black menhir, leads up through the woods to the Pfifferlingsberg and edges on the Mehlinger Heide, one of the largest heathlands in southern Germany. On idyllic forest trails you hike through the Weinbrunnerhof to the  Lanzenbrunner Weiher, a gem in the Otterberger forest. Passing the Drehenthalerhof and over the Kahlenberg the trail then leads you to a small quarry where the rare Leopard sandstone was once won. A magnificent view over to the Donnersberg can be had from the hill in front of Potzbach. Wandering through an idyllic deciduous forest, you will soon reach the Igelborner Hütte with its view of the Donnersberg. Now going  downhill, you will encounter some historical boundary stones dating back to the times of the Otterberger Monastery and reach the imposing Menhir Hinkelstein, the namesake of this trail. Through the Scheid- Wald, past a natural swimming pool, the path leads back to the historic town of Otterberg. Via the Drehenthalerhof it is possible to shorten the trail to a day trip. In Winnweiler there is a connection to the Pfälzer Höhenweg.

A visit to the abbey church and the historic old town of Otterberg is well worthwhile.

Beautiful trails suitable for meditative walking in the peace and quiet of nature.

The Hinkelsteinweg starts at the Abbey Church in Otterberg, which, after the Speyer Cathedral, is the largest church in the Palatinate. We follow the trail markers (gray menhir stones on a white background) through the historic old town, past beautiful, half-timbered houses. Having reached the town walls, we turn left and then again immediately right and, after a short distance along the Lauterstraße, head left into the Bachstade. Following the trail, we reach a paved road after the Kneippanlage, on which we turn to the right. Continuously uphill, the trail leads along the Johann-Roos-Straße and then to the Rotenberg where we turn left in the forest. We follow the trail marker "black menhir on a white background" over the Pfifferlingsberg and past the "Mehlinger Heide", one of the largest heathlands in southern Germany. And well worth a visit especially in August, when the heather is in full bloom. A sign takes you to the entrance.

Through the forest we follow the path and reach the idyllic Weinbrunnerhof. After a short stretch on the paved road, we turn right onto a natural forest path which, at the upper end, gives us our first views of the Palatinate highlands. We cross the L 382 and wander on natural pathways to the Lanzenbrunner Weiher, a gem of the Otterberger forest. We now walk through the valley of the Grafenthaler brook, past the Husarenbrunnen, until we reach the signpost at the Drehenthalerhof. Here it is possible to shorten the trail and take the loop trail back to Otterberg.

We follow the trail markers on the Kahlenberg to a small quarry where the rare Leopard sandstone used to be extracted. A magnificent view for Donnersberg awaits us on the hill in front of Potzbach. We walk through Potzbach, open landscapes then accompany us past the Leithöfen and reach again a deciduous forest which accompanies us until we reach the "Igelborner Hütte" - a forest tavern run by the Pfälzerwald-Verein Ortsgruppe Winnweiler (opening times: Wed from 11:30 hrs.; Sat from 14:00 hrs.; Sundays / holidays from 10:00 hrs.; For groups of 10 people or more, following reservation). From here it is possible to connect to the "Pfälzer Höhenweg" at the Winnweiler Bahnhof. You should follow the trail marker "black menhir on a yellow background ''.

The path now leads downhill to Höringen where the Bauerncafe Gebhardt (opening times: only for (hiking) groups by appointment, Tel. 06302-1231) invites you to stay longer than planned with its delicious food . We then go uphill, over the Hauptstrasse, Bergstrasse and a meadow path before we are rewarded for our efforts with a magnificent view over to the Donnersberg , the highest hill in the Palatinate, with its 687 metres.

On the following stage of the Hinkelsteinweg we encounter a variety of landmarks, which, if they could talk, would tell you more about the history of the Otterberg Monastery. The crozier is still recognizable on many of the surrounding stones. Now we reach the menhir "Hinkelstein", which gives the trail its name.

Menhir was originally a Breton name meaning long stone for a stone monolith set up vertically and several metres in height(maen = stone, hir = long). In German-speaking countries menhirs have been called “Hinkelstein” since the Middle Ages.

At the menir "Hinkelstein" the regimes of the Falkenstein, Kurpfalz and Schallodenbach met up with each other until the French Revolution. Even today, the massive “Hinkelstein” is the border stone where the municipalities of Otterberg, Höringen and Heiligenmoschel meet. The Hinkelstein was first mentioned in the year 891 by the Romans and is still about 2.20 metres high and 1.50 metres wide and is flanked by two carved boundary stones. A seating area invites you to rest .

Further along on our way, we pass the Lenhardt-Stein, a memorial stone for a former ranger, turn off at the pavilion and walk downhill to Birotshof, where we will find an enchanted pond. Further down we cross the L 387 and get to the festival site of the historic Spring Festival (held in years with an odd number) of the town of Otterberg. Now we go uphill again to the Drehenthalerhof where there is a shortcut towards Winnweiler.

Down through the Scheid-Wald, we walk through the flood plains of the Otterbach to the town of Otterberg, with its beautifully-situated natural swimming pool. Further along the flood plains we come to the Johannis parking lot. We cross the parking lot and the Johannisstrasse, go through the “Loch" (a passage between the houses at the Gaststätte Kraus) into the old town of Otterberg and back to the starting point of this circular route, the abbey church.

Travel Guide: Hikes in the Palatine Uplands and Donnersberg 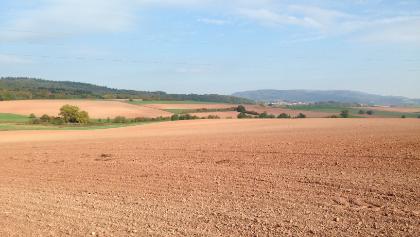 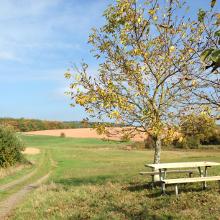 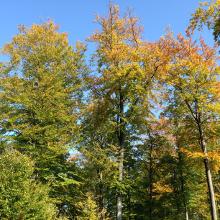 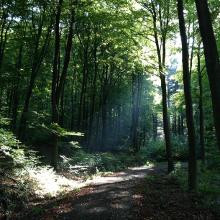 The "Hinkelstein" and a variety of other historical landmarks are situated on this trail passing, through  forests, meadows and country lanes, all ...