Responsible for this content
Cicerone Publishing
Giles Salt
on the June 07, 2021

Excellent walk. Great views and some beautiful parts along ...

Well-made paths run along both flanks of the Wharfe between Bolton Bridge and Barden Bridge and, with several other crossing points between the two (but not at The Strid), there are various possibilities for circular walks, from a simple two-mile (3km) stroll to a satisfying eight-mile (13km) circuit. The route described here combines the best stretches of the river with a taste of the open moors above.

Time required: 2 hour(s) 30 minute(s)
Terrain: Rougher paths over Middle Hare Head
Description: Leaving the Strid Wood car park go right, crossing to a stile from which a path is signed up the field edge to Broad Park. Over another stile in the top corner, turn right and follow a clear path contouring the hillside above the wall. Ahead lies the expansive sweep of Barden Moor while to the right is a picturesque view along Wharfedale to Barden Tower, from here looking more like a baronial castle than the ruin of a mere hunting lodge. Keep with the main path as it describes a gentle arc across the moor, eventually rising at the far side to a wooden stile blocking a gap in a stone wall. Carry on to a gate beside a lane.

Remain inside the wall, turning left and following it up some 250m to a stile. Now strike a left diagonal line up the hillside to meet a clear path running along the top. Follow it left through a gateway, crossing a shallow col between High and and then swinging left beside a wall below old workings on Little Hare Head. Continuing downhill the prospect opens across the lower reaches of Wharfedale to Barden Fell.

Leaving the moor through a gate, swing half-right along a trod. Ignore a crossing track and paraphernalia pertaining to an underground pipeline from the reservoir, and aim for another gate at the very far side. Bearing left, the bridle path continues to and descends pleasantly through the trees. Going out at the bottom, cross a small field to the nearer of two gates in the far corner. A well trodden line leads you on at the edge of grazing pastures, eventually emerging onto the main road opposite the former priory gatehouse. Follow the road through the low, narrow arch, leaving just beyond onto a drive towards the church and ruins of .

The monastery at Bolton was founded by Augustinian canons in 1154 as a priory, only acquiring its 'abbey' status as part of the PR accompanying the new railway in the 19th century. The small community had originally settled on the edge of the Embsay moors some 30 years earlier, but were grateful for the gift of a more sheltered location on the banks of the River Wharfe from Lady Alice de Romilles of Skipton Castle. A touching tale, immortalised in Wordsworth's poem 'The Boy of Egremont', attributes her largesse to a desire to create a memorial to her son William, who lost his life trying to leap The Strid when out hunting, although his signature appears on the deed of gift - such is the stuff of legend!

However, the priory was never well-endowed and, beleaguered by intermittent poverty, sickness and the unwelcome attentions of Scottish raiders, failed to realise the prosperity and status enjoyed by some of the other Yorkshire monasteries such as Fountains and Rievaulx. By the time of the Dissolution, almost four centuries later, the West Tower still remained incomplete and, despite an attempt by the last prior, Richard Moone, to bribe Thomas Cromwell for a reprieve, the lands were seized by the Crown and sold off to the Cliffords, who were by then the rulers at Skipton Castle. To his lasting credit Moone did, however, manage to secure the 13th-century nave for the use of the parish, a status that it retains today.

Dedicated to St Mary and St Cuthbert, the church is noted for its fine medieval roof and stained glass, the latter added by Augustus Pugin as part of extensive renovations during the 19th century. Surrounded by the evocative ruins of the former priory, the east wall of which still rises majestically to its full height, it drew many of the Victorian romantics and both Turner and Landseer captured its haunting setting in paintings and sketches.

(The ruins of Bolton Priory)

(Crossing the River Wharfe by the Friar's Steps)

Just before reaching the church, a path leaves to skirt the ruins on its way to meet the at the Friar's Steps, once the only means of crossing the river. As you climb up the far bank towards Cat Crags, there are some splendid atmospheric views back through the trees. Keep the high path above the steep bank, ultimately coming out onto a lane at the foot of Pickles Gill. Cross the ford (or use the bridge just upstream if you don't want to risk wet feet), but then abandon the lane just beyond for a path signed to . Returning to the riverbank, follow it up to a wooden bridge opposite the Pavilion Cafe. Cross there to continue upstream through Strid Wood, the fragmenting paths reuniting to lead to itself, a mile (1.6km) up the valley.

Suddenly forced into a narrow gap, barely two metres across, the river abruptly drops its innocuous appearance to become a thundering torrent at . Its very narrowness attracted the daring to leap across, earning it the name 'strid' or 'stride'. But the stakes are high, because a slip means almost certain death in swirling pools up to nine metres deep. And when the Wharfe is really in spate, the fury of the deluge overspills the banks to sweep across the rocky platform. The rocks can often be slippery, so take care.

Ever since the Devonshires opened the woods to the public at the beginning of the 19th century, the spot has been a popular haunt, with a network of paths leading to striking viewpoints and vistas, laid out by a former vicar of Bolton Priory Church. Strid Wood is now a site of special scientific interest (SSSI) and contains native sessile oak, ash and beech as well as other trees. In spring, the ground bursts into colour with snowdrops, bluebells and wood anemones and over 60 different types of plant have been recorded. The wood is also rich in bird life with over 40 species breeding here, including nuthatches, tree creepers, dippers and wagtails.

Taking the lower of the two onward paths, carry on up the valley to enjoy some spectacular views into the ravine before rejoining the main trail. After some 800m, bear left at successive forks, following signs to Strid Shop and Car Park. The path climbs to a break in the trees that reveals a last dramatic view along the valley before returning you to the car park.

From: The Yorkshire Dales Volume 1: South and West
Author: Dennis and Jan Kelsall 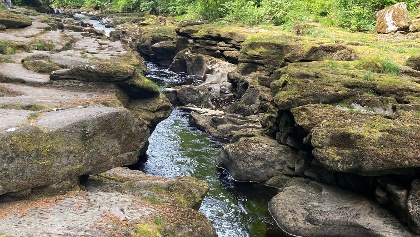 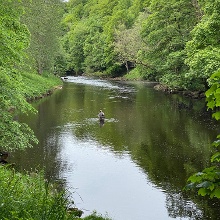 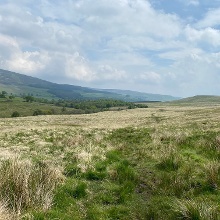