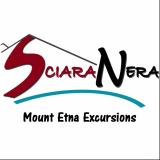 It’s a beautiful grotto of lavic origin, that dates back to the 1971 eruption on the eastern side of Etna.

The beginning of the path is nearby the Citelli Refuge. Starting from the clearing in front of the Refuge, walk along the asphalted road you came from for a few metres, until you see the entrance to the path, also indicated by a red sign sign on the guard-rail. The first part of the path is insine a wood with birch, pine and beech trees.  Follow the red painted signs until the end of the wood, where you find a fork in the path: on the right, you go towards Frumento delle Concazze Mount and the 1928 lava flow, whose track is described on the "Serra delle concazze" trail (check on the web site or download it in ViewRanger!). If you go straight on (you can notice the pole in the photo), you go towards the Serracozzo Grotto.

We keep on going towards the grotto. Along the walk we find sections of wood, then sections of sand and a few pipelines of lava rocks where the water, that originated in spring by the melted snow, flows. During the years, some sections of these pipelines have been polished by the water, turning into strange shapes and colours. You can also notice a particular stone, whose dialect is "cicirara stone", because of the white little impurities on the inside that look like chickpeas.

After a few kilometres you get to the crater, on the inside of which you find the grotto. The entrance is very low: be VERY careful of the ceiling of the grotto, since it has VERY DANGEROUS sharp edges.

Ideally you should bring with you SAFETY HELMETS and torches. Once you get in, the grotto appears to you in all its splendour: the openings on the ceiling allow the light to get in, underlying on the sides of the grotto, the stripes left by the lava during its flow.

After a few metres the height of the grotto reduces significantly, so you have to crawl to move onwards. We suggest you going beyond the lightened areas ONLY if you are equipped with torches and helmets.

From here you can keep walking on the Serracozzo Trail route, in order to create an interesting ring route to come back to Citelli Refuge (check info in the site or donwload the track in ViewRanjger!)