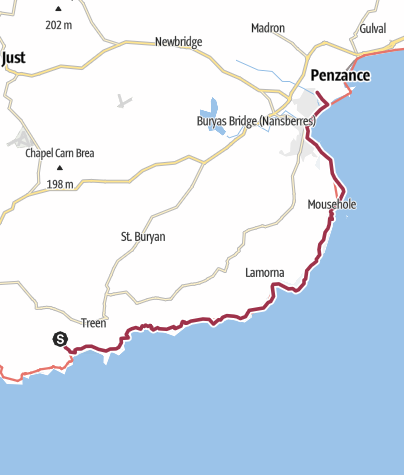 Difficulty: Varied. A difficult start with some serious hills to climb. It remains relativley difficult until Lamorna, where boulders litter the path but from then on it is straight forward.

Aside from Porthcurno and Lamorna, tiny fishing hamlets are the only signs of habitation on this coast, until you reach Mousehole. Enjoy the sense of wilderness because just around the corner wait the calm waters and towns of Mounts Bay. This is West Cornwall’s economic centre and it has maintained a seaside charm that draws tens of thousands of visitors every year.

It is a picturesque working district that caters for visitors and locals alike. The busy harbour at Newlyn is still home to the country’s second largest fishing fleet, the shops and cafes of Penzance provide a centre for the surrounding towns and villages and St Michael's Mount draws visitors from across the world.

The towns share a history dating back to pre Roman times and the short distance to be covered allows ample chance to wander the streets, investigate the busy harbours and pay a visit to St Michael's Mount.