Responsible for this content
Kidd Wong
Emily Maggio
on the May 05, 2020

Starting Point: The Peak
Finishing Point: Pokfulam Reservoir
Length: 7 kilometres
Time: 2.0 hours
Difficulty: Fairly Difficult
moderate
Distance 5.6 km
Duration2:08 h
Ascent229 m
Descent376 m
Highest point483 m
Lowest point216 m
Hong Kong Trail Section One begins at the Peak Tram Station on Lugard Road. The beginning section is a level vehicular road that can be easily tackled by hikers of all ages. The route circles the mid-slopes of Victoria Peak. You can enjoy beautiful views of Victoria Harbour and Kowloon. Besides, there are many information plates along the way. One of them introduces the origins of Tai Ping Shan and Lo Fung, both Chinese names of Victoria Peak. This summit is the highest point of Hong Kong Island. Because of the Humid and misty environment, the densest forests on Hong Kong Island are concentrated on these hills.

Strolling along the Native Tree Walk, you come across a great variety of flora. Some of them are pointed out by information plates. Those highlighted include the Lance-leaved Sterculia (Sterculia lanceolata), Hong Kong Pavetta (Pavetta hongkongensis), Turn-in-the-wind (Mallotus paniculatus), Silver-back Artocarpus (Artocarpus hypargyreus) and Reevesia (Reevesia thyrsoidea).Further up, an India Rubber Tree with dense aerial roots stands by the trail.

Beyond Harlech Road, the going gets moderately difficult, as the hiker has to negotiate steps, cement hill paths and dirt roads. Further up to the Lung Fu Shan lookout, the spectacular landscape of western Hong Kong Island unfolds before you. After feasting yourself on so much beautiful landscape, follow a flight of steps down a steep slope. Soon, Pokfulam Reservoir welcomes you with its emerald water. On the left, you find the Pokfulam Family Walk that runs parallel with the lake. This level plantation path is a pleasure to explore. At Pokfulam Reservoir Road, Section One of the Hong Kong Trail comes to an end.

To get to the starting point on the Peak : 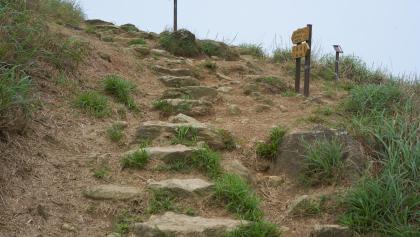 The Most Beautiful hikes Within China
China