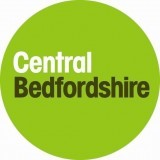 Responsible for this content
Central Bedfordshire Council
Zoë Taylor
on the October 19, 2020

Really easy to follow, clear route and steady going. Did an ... 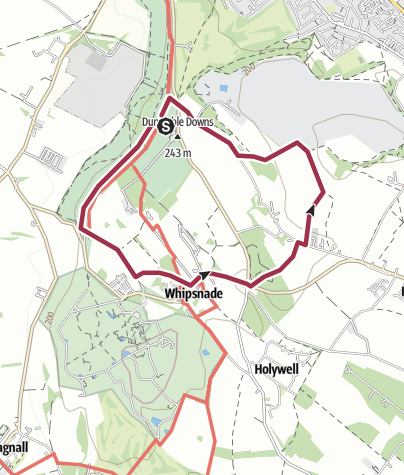 This walk covers a variety of terrain including heathland, chalk quarries and downland as well as grassland with the opportunity to see a variety of flowers and wildlife
easy
Distance 6.9 km
Duration1:47 h
Ascent63 m
Descent68 m

Whipsnade
The village of Whipsnade was not named in the Domesday Survey and was possibly an amalgamation of lands recorded in 1086 from Eaton Bray and Studham and possibly Totternhoe, indeed during the 12th Century much of the parish was still wilderness. A settler named Wibba cleared a piece of the woodland giving the parish the 13th Century name of ‘Wibba’s Snaed’. The church of St Mary Magdalen at Whipsnade was first mentioned in 1228, the tower, built from bricks possibly obtained from the dell in the field behind the church, dates from 1590 whilst the nave is more recent dating from 1719, the pulpit inside is 17th Century.

Tree Cathedral
The Tree Cathedral is a tranquil place for worship and meditation and is designed to match the ground plan of a medieval cathedral. It is not consecrated, but occasionally hosts services, and is permanently open to the public without charge. Owned by the National Trust it is managed and funded by the Trustees of Whipsnade Tree Cathedral. The plantings are laid out to form a nave, transepts, and chancel for public worship, chapels for private prayer and remembrance, cloisters for meditation, and a cloister garden for relaxation with a dew pond at its centre. Planting began in 1930 by Edmund Kell Blyth assisted by Albert Bransom as a memorial to three friends who had perished during the First World War.

Whipsnade Green
This is part of a network of 213 Commons found throughout the Chiltern Hills and the Chilterns Area of Outstanding Natural Beauty (AONB), and is much valued locally as an area of open access land with a strong local community interest in its use. Typical of many of the Chilterns Commons the Green has undergone changes, particularly since the end of the Second World War and the decline in traditional hay making and grazing has resulted in an increase in scrub and rougher grasses. The meadows are a most attractive part of the Green and the habitat gives the Green its distinct ‘commonland’ character.

Whipsnade Heath
Whipsnade Heath was once an area of open heath but since the decline of sheep grazing, trees and scrub have colonised much of the site. The Heath offers an interesting mosaic of grassland, scrub and woodland, and mainly consists of dense scrub areas with a mixture of hawthorn, elder and blackthorn. The more open woodland areas include oak, wild cherry, beech and hazel with displays of bluebells and wood anemones in the spring.

Dunstable Downs
The downland landscape is very distinctive with rolling hills, steep escarpments, fine views and areas of open grassland and scrub. The chalk was formed at the bottom of a shallow, warm sea approximately 70 million years ago by the accumulation of the remains of microscopic plants and animals on the seabed. When sea levels fell and became dry land, erosion sculpted the dry valleys and rounded hills that we see today. Chalk grassland is a very rare habitat that was traditionally managed by large flocks of sheep; this kept the downs open and alive with wild flowers and insects. Gradually sheep grazing declined, and after World War II ceased altogether; this meant that the Downs became overgrown and scrub began to invade threatening the grassland communities, and resulted in the disappearance of some grasses and flowers.  Fortunately, again sheep are grazing part of the Downs and volunteers help to keep the grassland open, allowing a varied mix of grassland and scrub to benefit as many
species as possible.

This route can be walked in conjunction with Circular Walk 10 – Dunstable Downs to create a longer route.

Dogs are welcome on all our sites and rights of way but do keep them under control and away from any grazing animals as well as other visitors and please be a considerate owner; clean up if your dog leaves a mess.