Responsible for this content
Zum Wohl. Die Pfalz. Verified partner  Explorers Choice
The Barbarossa Cycleway runs the whole way across the Palatinate, starting on the Rhine in the imperial city of Worms and passing through the Barbarossa city of Kaiserslautern to reach the river Glan at Glan-Münchweiler in the Kuseler Musikantenland region. The cycle route runs the gamut of Palatinate scenery. Coming from Worms, the Rhine Plain is characterised by agricultural use and viticulture. Starting from Ramsen, cyclists pass through the northern Palatinate Forest Nature Park featuring the Eiswoog, an idyllic forest reservoir and popular recreational spot, until the hilly landscape of the Westrich Plateau rises up to the north west of Kaiserslautern.
moderate
Distance 87.9 km
Duration6:01 h
Ascent886 m
Descent1,001 m
Highest point352 m
Lowest point91 m

The approximately 90 km cycle path traverses the beautiful and diverse scenery of the Palatinate. A section of around 5 km through the Palatinate Forest between the Eiswoog and Alsenborn is the only stretch to feature significant gradients.

The cycle route takes its name from none other than Emperor Frederick I, better known as Barbarossa, who had a decisive influence on the history of the Palatinate in the 12th century. In addition to numerous castle ruins, the Imperial Palace in Kaiserslautern is one of the most significant examples of his work. The route also features a wealth of other tourist attractions and places to take a break and relax.

The route logo is a stylised image of Emperor Barbarossa. It is based on the sculpture above the north portal of Worms Cathedral.

Feedback, errors or omissions? Contact us by email: radwege@lbm.rlp.de www.radwanderland.de (responsible for infrastructure and route description).

Difficulty level: The approximately 5 km section in the Palatinate Forest between the Eiswoog and Alsenborn is the only stretch to feature longer ascents. Otherwise this is a consistently flat route with very moderate inclines.

Mostly asphalt roads, with some coarser crushed brick/stone surfaces in the foothills of the Palatinate Forest north of Kaiserslautern, and between Alsenborn and Ramsen.

Kaiserslautern – Eisenberg, 32 km: “Natural resources abound”: Minerals have been mined since time immemorial in the area between the Palatinate Forest and the region around the Donnersberg mountain, and there is also a long smelting tradition here. The cycle path skirts a few of these locations and requires plenty of effort up the last climb before the Rhine Valley section. 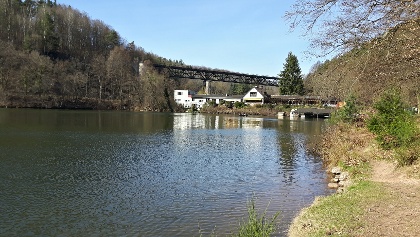