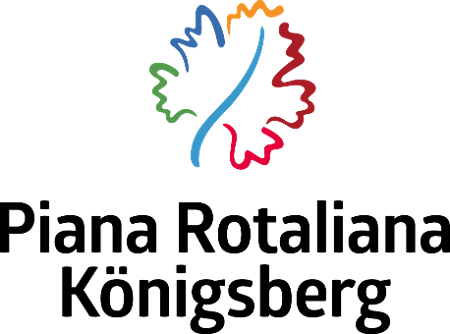 If you find any inconsistencies, errors or inaccuracies in the description, please notify the Consorzio Turistico Piana Rotaliana Königsberg, who will make the necessary amendments to the directions.

This cycle route (not signposted, route no. 5 on the tourist map) covers a distance of about 25 km, which can be divided into three sections: the first, from Pressano (or Lavis) to the intersection with the Wine Road from San Michele all'Adige, the “eat&drink"; the second, from Masi Canazzi to Masen, for "uphillers"; the third, the return to the start point, "unwinding".

From Pressano (or from Lavis with a gentle uphill run to the village) cycle on gently undulating terrain, with beautiful views down to the Piana Rotaliana from Lavis to Mezzocorona and as far as the Lower Val di Non. The gradient on this stretch never exceeds 5/6%, enough to warm up your legs for the subsequent climbs. Take a 180° turn and you’ll see Monte Bondone, with the Vigolana just to the left of it. Once you are over the hill at Maso San Valentino, a fine descent awaits you, but take care as after the first bit of winding road you come to a fast stretch down to Masi Canazzi, where you can easily top 50 km/h.
At the junction with the road from San Michele all’Adige (stop) turn right and start climbing (an interesting detour on the left, though not entirely suited to racing bikes, takes you up to Monreale-Königsberg Castle): once you have passed Masi Canazzi and come to the intersection, turn left at the stop sign and continue to Maso Barco. Before the left hand bend take the road on the right going up between the shrine and the farmhouse and carry on, keeping to the right, to the edge of the woods, where you turn left towards the castle. To return, head up towards Villa Piccola until you are back on the main route). If you are fit, you can let rip on the first 3 km, but take care to leave yourself enough puff for the next challenging stretch. The hair-pin bends up to the village of Faedo give fantastic views over the Adige Valley from north to south, and of the Paganella, overlooking the valley from its 2125 m. Once in Faedo, go past the Church of S. Agata, a jewel of Gothic-Romanesque architecture; a few fountains in the centre of village are useful for refilling your water-bottle. Leaving the village the terrain remains flat as far as the first hair-pin bend, where the most demanding kilometre and a half of the entire route begins. The gradients are into double figures and a greater use of low gears is needed; the final stretch which takes you to Pineta after the village of Palai is a narrow uphill that will test your fitness. Once you get to Pineta, the environment changes and you join a narrower road through the woods, until, after 3 km of ups and downs, you reach the Croce delle Serre ‘pass’ (820 m), a natural route through to the Cembra Valley and the Masen plateau.
The subsequent descent to Ville di Giovo heralds the start of the third section of the route, which is much easier and highly enjoyable. It takes you past the Cembra Valley’s beautiful cultivated terraces, with views of the characteristic porphyry quarries of the Albiano area and the peaks of the Lagorai, which you can stop to admire on the ‘natural terrace’ near Maso Roncador. The fast downhill run continues to the village of Palù di Giovo, birthplace of cycling champions such as the Moser brothers and climber Gilberto Simoni, several times winner of the Giro d’Italia. After passing through Verla di Giovo there is another 3 km of gentle downhill as far as Maso Franch, where a short walk will take you to the lookout point over the Zambel nature park, with the river Avisio and the San Giorgio dam. A short section, still downhill, brings you to the town of Lavis, where you start to climb the narrow Maso Forli and Maso Ingram road, which brings you to the Pressano plain, after passing by a famous local wine producer.
Have a good ride!

On Via Nazionale in Lavis (roundabout between Hotel Sartori's and the cemetery) follow the signs for Pressano. At the traffic lights take the S.P. 131 road which rises up to the left (this part can also be cycled; turn right at the traffic lights and park in Via Rosmini), until you see the sign indicating the beginning of the town. Continue on the S.P. 131, ignoring the fork off to the village centre (oratory on the left), proceed for 500 metres, then turn left into Via S. Antonio and the car park.

In Via S. Antonio, Pressano (car park) or in Via Rosmini, Lavis (car park).