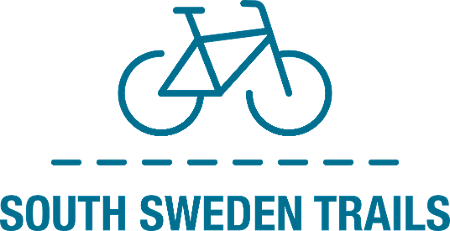 With its mild climate and easily accessible terrain, south Sweden is ideal for cycling.

In the forests of Småland in the north, on the coast in Blekinge and Skåne in the south – the Sydostleden trail offers you pure and varied nature everywhere. From Växjö to the coastal town of Simrishamn, the Sydostleden runs 270 km through beautiful countryside.

Along the way there is the extensive forest and lake landscape of Småland, the interesting coastline in Blekinge and the fine sandy beaches of Skåne. With your bike, you'll be on mainly on car-free or low-traffic roads and well-paved forest and country lanes.

Nature, culture, history: Along the Sydostleden you will get a varied picture of southern Sweden - whether you want to master the whole route at once or in several stages. The towns Växjö and Sölvesborg, as well as the picturesque villages Brösarp and Kivik, are particularly worth exploring. Along the way, especially in Blekinge and Skåne, there are also excellent restaurants.

Allow enough time to take a detour and explore the surroundings of Sydostleden extensively.

On the Sydostleden website you can find more helpful information about the route.

Växjo is the northernmost point of Sydostleden. In the cozy alleys we find the possibility for shopping and stopping for a bite to eat. The highest point of our route is at the water tower "Ekotemplet". On historic railway embankments we cycle towards Tinsryd am Åsnen, an extensive forest and lake landscape in the Kronoberg region, suitable for fishing, canoeing or swimming.

In western direction we drive on the old railway embankment to Urshult. Then we turn south in a big bend and - passing the lakes Hönshyltefjorden - finally reach Ryd and Fridafors.

From Fridafors we continue along the river Mörrumså to Karlshamn. The town was built in the 17th century around a fishing village and became famous for its large trading port. Here the landscape slowly becomes more open and our way leads from now on always near the coast.

From Karlshamn we cycle back a bit on a familiar route and then turn west towards Mörrum. There we cross an old stone bridge and the river Mörrumså. This is a world-famous sportfishing area. After Mörrum, follow the road to Sölvesborg on a largely parallel path. Cycle between farmland and coastland the small village Norje indicates half way on Sydostleden. Before entering Sölvesborg we cross Europe’s longest cycle brigde Sölvesborgsbron, 760 m long and beautifully designed.

Through a small forest we reach Valje, where we cross the border between the provinces of Blekinge and Skåne. Our way now leads relatively straight to the west. We cross villages such as Edenryd, Gualöv, Bäckaskog, Fjälkinge and Hammar before reaching our destination Kristianstad at Hammarsjön. In the city centre - and at the same time in the middle of nature - lies the new Naturum, which offers insights into the ecosystem of the extensive lake landscape around the city.

Past Hammarsjön we now head south to Rinkaby and Åhus, a well-preserved medieval town. On our right there are countless cereal fields, on our left the beautiful coastline. Thus we reach Brösarp, where a sightseeing tour through Brösarps Backar, the picturesque hilly landscape behind the city, is offered. During the summer season a steam train runs between Brösarp and St. Olof.

In a round through Verkean's nature reserve we continue. We pass Hallamöllas Vattenfall, Skåne's highest waterfall at 23m. Duch Eljaröd then goes to Vitaby, whose church towers high above the village and offers a wide view of the Baltic Sea and the surrounding fields and pastures. We now descend to Kivik on the coast, which is particularly famous for its apple plantations. We find a place to stop for refreshments in the Kiviks Musteri. Passing the Stenshuvud National Park, which we should definitely visit, we arrive in Vik and continue along the coast to our destination Simrishamn.

By train to Växjö station; in Sweden you are not allowed to take bicycles on all public transport. It is therefore advisable to check in advance whether transport is possible.

Växjö lies next to the E25 motorway, which connects the east coast (Kalmar) with the west coast (Halmstad).

Parking in the center of Växjö