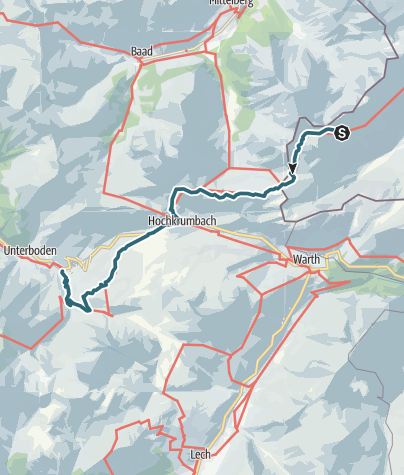 TO SCHROCKEN
14.3 km
4:54 h
391 m
1147 m
The last stretch of the Allgäu Alps is also one of the most beautiful. It offers spectacular views over the main Allgäu ridge, from the Trettachspitze to the Biberkopf peak, the wildly romantic Koblat and the most striking Allgäu peak, the Widderstein.

The 1,972m high mountain trail over the Gemstel pass to Hochtannberg was a much frequented connection with the Kleinwalsertal valley even in the Middle Ages. The trail over the Koblat ridge repeatedly offers views into this northernmost and most secluded Walser locality. Hochkrumbach – formerly called Krumbach – is the smallest but most central town in the Walser Tannberg region. Krumbach was first mentioned as a settlement zone in 1453. The settlement of the pass hollow at between 1,600 and 1,700m in altitude took place at a time when the slopes were to a large extent covered in forest. However, the high demand for wood in this permanent settlement amid the snow led to progressive deforestation, and thus the situation had become difficult due to wood shortages even by the 18th century. In one particularly severe winter, the firewood stocks ran low very early and it is recorded that the town priest even burned the church pews so as not to freeze to death. In about 1856, the number of people living there had fallen to 20 and even the priest had left the hostile town. In 1885, the mountain community was finally entirely abandoned. It was only in the middle of the 20th century that new life was breathed back into the place. Today, Hochtannberg can offer an extensive and highly varied skiing area and has firmly established itself as a popular holiday and excursion destination. The Hochtannberg pass represents the continental watershed between the Rhine and Donau regions. The landscape offers contrast with varying rock types and a very charming variation in forms of terrain. For while the sheer rock faces of the limestone and main dolomite Widderstein, Braunarlspitze and Juppenspitze peaks – to name but a few – tower up steeply into the heavens, troughs and green grassy slopes occur in the areas of the more easily weathered marl. The Körbersee and Kalbelesee lakes are deemed to be the most photogenic enrichments of the landscape, as is the little Simmel peak with the St. Jakob chapel in Hochkrummbach. However, this area is also treasured by botanists due to its diverse plant world with the most varied and sometimes still vast alpine biotopes highly deserving protection. The Schröcken locality was already populated in the 14th century. By the 17th century, the population had grown to over 200 people, one third of whom lived in extreme conditions between 1,500 and 1,700m in altitude. These mountains have long since been abandoned. Today, the community of Schröcken is a popular winter holiday destination, which was made possible above all by the extension of the access road, safe for travel in winter.
Highest point
2182 m
Lowest point
1265 m

From the Mindelheimer Hut, head at a leisurely pace up and down along the eastern side of the Liechelkopf and the Geißhorn to the Koblat, a mountain ridge between the Kleinwalsertal valley and the Tannberg mountain close to the German-Austrian border. Walk over this high ridge to reach the Gemstel pass at 1,971m and the Widderstein Hut right at the foot of the massive Widderstein (2,009m, Mindelheimer Hut – Widderstein Hut 3h 30min). At the refuge, follow the signs down to Hochkrummbach at the Hochtannberg Pass (1,676m), where you will reach the road close to the top of the pass. Follow it only for a short while until the turnoff of a walking path, which leads to the West of the Kalbelesee lake towards the mountain. After just a 20-minute climb, you will reach a pass at which the charming hollow of the Körbersee can be seen in front. (Hochkrumbach – Körbersee 1h 15min). On the western banks of the lake, walk further along a footpath over a low crest into the Hochtal valley of the Auenfeld meadowland, where you will come onto a roadway. Now walk for a while along the young Bregenzerach river to the Batzenalpe (1,560m) and further downward to Schröcken (1,269m, Körbersee – Schröcken 1h 15min). From Schröcken, follow the Hochtann mountain road for a short while before coming to a merchant trail that leads to the Batzenalpe mountain and the lovely Körbersee lake.
Arrival by train, car, foot or bike