The Valle d'Aosta presents itself to its visitors with many faces. Valdostan cuisine mixes here with the French "savoir vivre" and the landscapes shaped by beautiful valleys, lakes and unique forests.
Read on
Outdooractive Editors  Verified partner
Author of this page 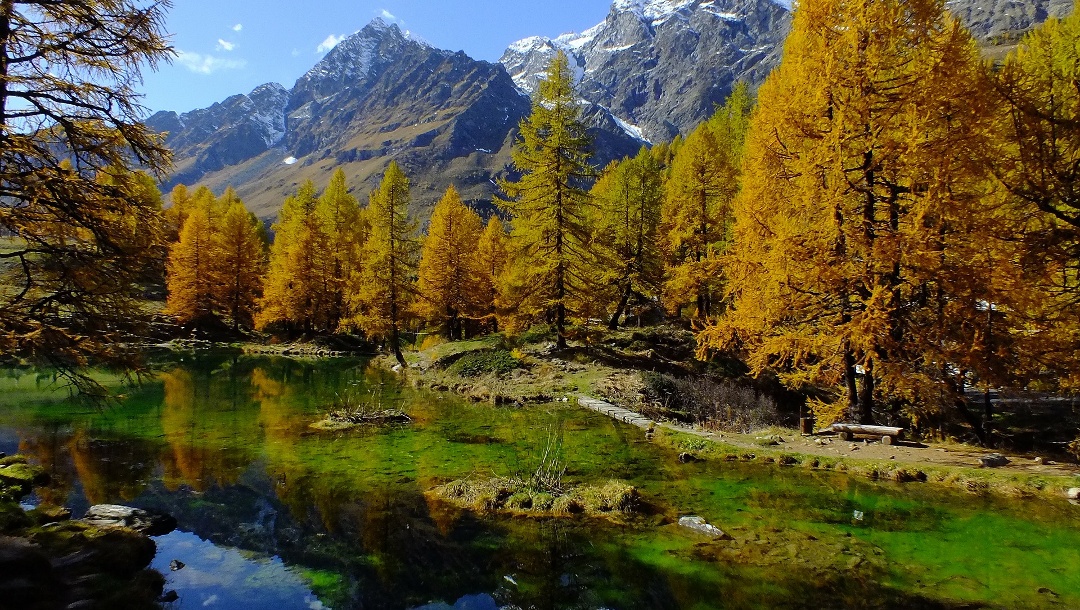 The Petit Saint-Bernard pass (2,188m) is an alpine pass on the border between the Valdigne and the ...

Rutorine Falls are among the most beautiful and largest in Italy.

from Silvia Castellano,   Outdooractive Editors
Mountain pass · Cogne und Gran Paradiso
Col Lauson
Cogne und Gran Paradiso
from Thomas Danz,   Outdooractive Editors
Features
2D 3D
Maps and trails
Valle d'Aosta is located in the extreme north-west of Italy, on the border with Switzerland, and France from which it receives a lot of influence on different points of view. To the south and west the region borders with Piedmont. Valle d'Aosta, as the name suggests, is geographically composed of a main valley crossed by the tributary of the Po Dora Baltea. Through the side valleys you have access to some of the most famous and highest mountains in the Alps, including Mont Blanc, Matterhorn, Monte Rosa and Gran Paradiso. While in summer you can take breathtaking hikes and mountain tours, in winter the snow transforms the Aosta Valley into a "Mecca" for winter sports' enthusiasts. Due to the strategic position, and the conformation of the territory, the valley offers connection and access through the Alps between Italy and France. Obviously this feature has not gone unnoticed over time, and therefore strongholds and castles add to this magical place their charm.

The Aosta Valley: border area between Italy, France and Switzerland

The autonomous region is located in the far north-west of Italy and shares the border with Switzerland and France. The Swiss canton of Valais and the French region of Rhône-Alpes border directly on the smallest area of the country and give the area an international flair. This is also reflected in the bilingualism of the population. Even the final exams of the local schools are held in French and Italian - a natural advantage in times of globalization.

It doesn't matter if it's summer or winter, the starting point of the Aosta Valley is ideal for any type of sporting activity. The valley is home to some of Italy's most famous winter sports areas, including Courmayeur and Breuil-Cervinia, where skiers and snowboarders can let off steam on nearly 880 km of slopes. The region boasts in its vicinity among the highest peaks in Europe, including: Mont Blanc, Monte Rosa, Gran Paradiso and the Matterhorn. The valley can be used as a starting point for the famous Haute Route d'Argentière à Saas Fee or for ski touring from Pont to Gran Paradiso. However, both tours require a high level of experience and fitness.

Culture in the Aosta Valley: traces of an eventful history

Due to its location near the border and the connection to the San Bernardino Pass, it is not surprising that the valley has played an important role in the history of Italy since the Roman development and was often the plaything of Franco-Italian border conflicts. One of the most impressive testimonies to these developments is St. Bard's fortress, which has guarded the entrance to the valley for eleven centuries.

Even older than the fortress is the Roman aqueduct at the entrance to the Cogne valley, which has stood there since pre-Christian times. Today it is accessible as a bridge and provides information on the architecture of the Roman builders with information boards. Younger, but no less interesting, are the many Romanesque chapels, which have their origins in the eleventh century and are often decorated with ornate frescoes. Especially the churches of San Martino in Arnad and San Maurizio in Moron are well-known, representing beautiful examples.

The millennia-old political importance of the region and the attempt to force Italianization during the times of fascism were probably responsible for the fact that the population always remained aware of its roots and that the autonomy has been preserved to this day ...

The Aosta Valley cuisine is characterized by substantial and simple dishes, often prepared with regional products. Isolated from the rest of the country by mountains and an elevated position, it has been difficult to import food into the valley for a long time. The situation changed after the complete logistical development, with which the French and Swiss influences took hold. An example is the “Seuppa vapeullenèntse”, for which the regional Fontina cheese is melted together with white bread, cabbage and broth. On cold winter days you warm up in the Aosta Valley with the “Caffè alla Valdostana”, which immediately gets back into motion with a blend of coffee, red wine, grappa, lemon peel and spices.

But the region is not only cultural and culinary, the vegetation is also varied: alpine natural parks with alpine pastures and glaciers, but also extensive meadows and forests waiting to be explored by bicycle or on horse-drawn carriages.

Adventure sports and a variety of hikes

As soon as the landscape is cleared of ice and snow, there are countless possibilities for almost any outdoor activity. Most of the remote refuges in the Ayas Valley can be reached by mountain bike via supply routes. Pila is also a paradise for bikers for its cross-country trails, bike parks and obviously many freeride routes. Rafting between streams and rivers is also very popular in the peaceful Aosta Valley, particularly in the Lower Valley and in the Gressonay Valley (Monte Rosa region). The area can also be explored comfortably on foot on the numerous hiking trails. So you have enough opportunities to enjoy this picturesque landscape with its varied nature, and its ancient remains from Roman and medieval times.

Show all offers in Valle dAosta

Show all webcams in Valle dAosta