When using the Route Planner, the route from A to B is determined by our Routing Engine. The best possible route is calculated based on the available trail networks for cycling, hiking, and other activities.

The routing engine is an important part of the platform and is specially designed to meet the needs of our outdoor community. The software we use is a custom development from our IT team. They are also responsible for the operation and maintenance.

What data does the routing engine use?

For the activities "Hiking", "Cycling", "Mountain Bike", "Road Bike" and "Alpine", the optimal route for the selected activity is calculated depending on the starting point and end point.

In Germany, Austria, Switzerland, Italy, and France, we use official data sets from the land surveying offices, which we enrich with additional data. Outside of these countries, we rely on the dataset of the OpenStreetMap community. All datasets are updated on a monthly basis.

Different trail networks are used depending on the map:

How is the route created?

Each route and every section of it are calculated using a start point and an end point. In the Route planner, a location or address is selected either via a search or by setting it directly on the map.

By doing this the exact position (georeference) of start and end points is defined and becomes available as a set of longitude and latitude coordinates (based on reference coordinate system WGS84).

The closest available route is searched for between the start and end points.

When calculating the route, essentially all streets and trails that are visible on the map are considered. In many countries of the world, the use of motorways by pedestrians and cyclists is prohibited. For this reason, motorways are shown on the map but are excluded by the Route Planner. Other exceptions include, for example, via ferratas when cycling.

In order to determine the best possible route between the start and end points, a numerical value is assigned to each section of the route, which is derived from various criteria including distance, the network of cycle and hiking trails themselves, and the activity type. The optimal route is the one for which the sum of all the numbers for each section from start to finish is the lowest.

This is different from the calculation of the shortest route, which assigns each section a numerical value based on distance. The optimal route may choose to deviate in cases such as cycling, for example, which would give preference to longer cycling paths or an asphalt road over shorter sections of trail.

In addition to directional calculations, the route also provides all information relating to elevation (elevation profile), duration, the types of terrain and paths along the way, altitude gain and loss on ascent and descent and when to "push/carry" if cycling.

To calculate the duration, a basic speed is assumed depending on the activity and the gradient (uphill/downhill). The calculation works on the basis of the determined speed and the distance covered.

From point to trail

When point A is not placed on a trail the routing engine will place the point on the closest trail and determine the route from this point.

Note: This feature can be turned off by selecting the 'magnet' symbol at the bottom of the map. 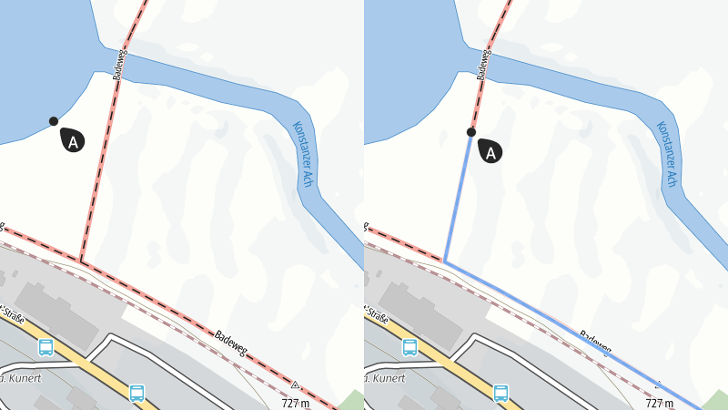 Start and end points can be defined with ease by simply searching for them. 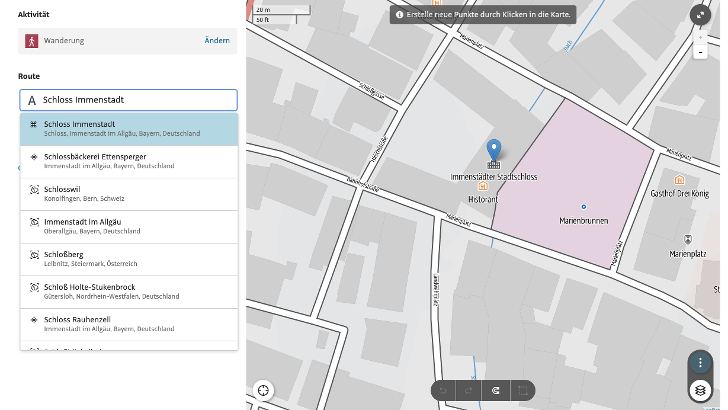 Cycling paths are given preference

When cycling is chosen as the activity, the route from point A to point B gives preference to cycling paths.