For those who prefer an active vacation, there are numerous sights and destinations to discover in Tenerife, with our Travel Guide being a source of inspiration for planning your next adventure. Enjoy browsing!
Read on
Outdooractive Editors  Verified partner
Author of this page

Pico del Inglés is the highest point and popular viewpoint in the Anaga mountains.

Pico del Inglés is the highest point and popular viewpoint in the Anaga mountains.

With an average annual temperature of 23°C, on Tenerife are the best conditions for extended hikes and exciting bike tours year-round. And of course, water sports are also quite popular. The 400 km of coastline and around 70 beaches are flooded with sunbathers, divers and surfers.

A completely different way to get to know the Atlantic is to go whale and dolphin watching. With a population of about 400 animals, the waters south of Tenerife are among the best places to spot sea dwellers.

The volcanic landscape of Tenerife is what makes the island unique. The most diverse natural areas can be marveled at in a very small area. The ‘Old Country’, the westernmost and geologically oldest part of the island, was formed about seven million years ago with the accumulation of basaltic lava. Fertile valleys extend around the volcanoes in the inland.

In the ‘Land of Light’, on the one hand, golden beaches invite you to swim, and on the other, marvel at lunar landscapes created by wind and water. The volcanic beaches in the south of the island radiate a very special charm with their black sand and natural pools.

The 43 nature reserves of the island occupy almost half of the total area. This offers plenty of space to be active. The area around the 3718 m high Teide is especially well known. The Teide cable car takes visitors up to 200 m before the summit.

The rest of the island is well connected with 1500 km of hiking trails and offers routes for everyone: past traditional Guanche villages, through fertile valleys and up to high peaks. One of the most beautiful walking routes is El Gran Recorrido 131, an 83 km long long-distance hiking trail that runs from north to south across the island.

The Tenerife Walking Festival, which takes place every year in May, is expected to attract around 200 visitors from all over the world. On 20 different routes, you can explore the fascinating contrast of primeval forests, volcanic mountain landscape, colorful vineyards and picturesque bathing bays.

The mild climate year-round and the varied landscape between the coastlines, the Anaga and Teno mountains and the black ...

The rugged volcanic rocks attract climbers from all over the world. Among the most popular destinations are the Roques de García, the Roque de la Grieta and the Torreón Figueroa.

In the highest part of the island, the Corona Forestal, there are over 200 km of mountain bike routes, the valley is crossed by easier bike paths, the coastal roads are particularly popular with road cyclists.

Tourism is by no means a new phenomenon on Tenerife. Already in the 18th century, the island was known for its therapeutic climate, the soothing breeze and the healing earth. To this day, numerous wellness and relaxation centers have sprung up on this basis.
Photo: Outdooractive Editors

The culinary lineage of Canary Island developed from traditional recipes, which step by step incorporated new flavors. Of course, a good drop from local cultivation can’t be missed – excellent grape varieties thrive on the volcanic soil of Tenerife.

If you are interested in the culture of the islanders, you will find what you are looking for in the capital Santa Cruz de Tenerife – whether on a museum visit or at traditional folk festivals. Even off the beaten tourist path, guests are always welcome to experience the language, religion, music, architecture and way of life of the ‘Tinerfeños’. 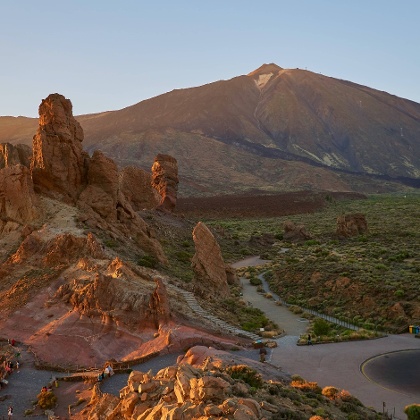 Show all webcams in Tenerife