Finland is not only the land of a thousand lakes but also the land of a thousand islands. Because off the south and west coast lies the largest archipelago in the world. The rough, maritime landscape forms a successful contrast to the lively coastal towns and the relaxed way of life of the archipelago inhabitants. Finland's capital Helsinki is also situated on the coastline.
Responsible for this content
Ellare Oy  Verified partner  Explorers Choice
routes offers places to visit accommodation Places to eat & drink huts

The fishing lodge of Alexander III, Czar of Russia, in the Langinkoski preservation area, is the ...

Verla is an UNESCO World Heritage site that captures an interesting phase of development in ...

The Virvik tour trail extends from the centre of Porvoo to Holken lean to shelter by Lake Gåsgårdsträsket.

Old Porvoo, with its red-ochre painted riverside warehouses, is one of the most photographed ...

In the mazes and on the walls of Svartholma Sea Fortress, visitors can experience the fortress' ...

Find a place to stay on the Finnish Coast and Archipelago 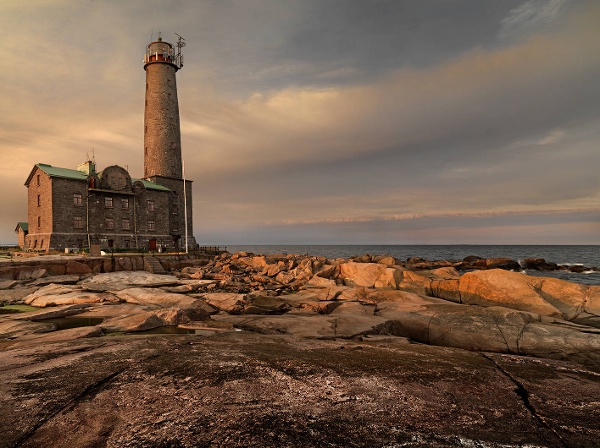 The Archipelago along the Finnish coastline is characterized by thousands of islands, rocks, and cliffs that are scattered off the mainland.

Particularly worth seeing are the 20,000 islands between the city of Turku and the Swedish-speaking Åland Islands.

Along the rugged Baltic coast, there are beautiful bays and long sandy beaches. A popular summer destination is Yyteri beach in Pori.

A visit to a lighthouse is a must on a tour along the coast. One of the most famous is the 150-year-old Söderskär lighthouse in the Porvoo archipelago near Helsinki.

On the land parts of Archipelago, there are interesting wooden towns, medieval churches, and castle ruins.

Historic ironworks can also be found along the Finnish coast. They played an important role in the region during and even before the industrial age.

Cities and regions in the Archipelago

Kokkola is located in the Central Ostrobothnia region on the northern west coast of Finland. The city is mainly known to tourists for its well-preserved old town of Neristan. It comprises twelve blocks of colorful wooden houses in the center of Kokkola. The landscape of the region is typical for Central Ostrobothnia: flat, forests and lakes in the hinterland and numerous islands off the coast. One of them is Tankar with its lighthouse, which is worth seeing.
Commune · Central Ostrobothnia, Finland
Kokkola

The coastal town of Kokkola is located in the northern archipelago on the West Coast of Finland. The most extensive ...

The Vaasa region around the historic town of the same name on Finland's west coast comprises eight municipalities. They are all unique and offer visitors to discover a lot of new things. Vaasa is best known for the Kvarken Archipelago, which extends in the Bothnian Sea just outside the city. The archipelago is a UNESCO World Natural Heritage Site, home to numerous species of birds and attracts people with its smooth and rugged rocks, picturesque villages, towering lighthouses and nature trails through lush forests. The Kvarken Archipelago is beautiful to explore by boat, kayak or canoe in particular – these ways you can reach remote islands and enjoy the peace and solitude of the archipelago.
Geographic region · Finland
Vaasa

The Vaasa region surrounds the Finnish city of the same name on the Gulf of Bothnia on the west coast of Finnland. It is ...

Pietasaari / Jakobstad region is far away from the noisy big cities. Here you only need a few breaths to get in harmony with nature. Lonely paths lead through forests and along rivers to remote bays and cultural cities. From island to island, the best way to get there is by water. The harmonious community in the region is characterized by a special sense of belonging. Here families and friends make music and sing together, craft markets and the Arctic Museum take us back in time and garden lovers also feel at home here.
Geographic region · Finland
Pietarsaari Region

The concentrated power of Scandinavian flair can be found in the coastal Pietarsaari region, known as the Jakobstad ...

In the Finnish Archipelago around Turku, the former capital and oldest city of the country, you will find the two cities Naantali and Parainen. The life of the islanders can also be experienced by island hopping. As you walk through the labyrinth of the archipelago, you will discover wooden houses, churches and national parks with pastures, forests and barren rocks. Naantali is one of the oldest towns in Finland, and tourists are particularly attracted to the picturesque old town with its colorful wooden houses. Parainen covers an area of the inner and outer archipelago, which includes the island of Utö with the oldest lighthouse in the country and part of the St Olav Waterway pilgrimage route.
Geographic region · Finland
Finnish Archipelago

The Finnish archipelago on the west coast of the country is populated by more islands than any other archipelago in the ...

The Åland Islands are an autonomous, mainly Swedish-speaking region in Finland consisting of over 6700 islands. The islands are the intersection of trade routes across the Baltic Sea and are known for their rich flora and fauna.

Walks take you to the sea, where secluded bays, shallow beaches, and the typical polished rocks are ideal for a bathing holiday. The capital Mariehamn has a long maritime tradition and is the only town in the almost untouched Archipelago.

Archipelago off the west coast

The Finnish west coast can easily be called the "Riviera of the North". Archipelagos and sandy beaches alternate with wooded towns worth seeing. Old lighthouses, historic manor houses and stone churches are also great destinations for a day trip.
Lunch on the Archipelago Trail
Photo: Juho Kuva, Visit Finland

One of the UNESCO World Heritage Sites is Finland's most famous wooden town: Rauma. The entire old town falls under the category of works of art worthy of preservation and the stone hill graves of Sammallahdenmäki, which are not far away, also belong to the World Cultural Heritage.

On the way north, you will pass the surroundings of Pori, one of Finland's most popular summer destinations. Before the loneliness of Lapland, Oulu, the secret capital of northern Finland, is the last chance to get a taste of the big city air.