Top regions not to miss 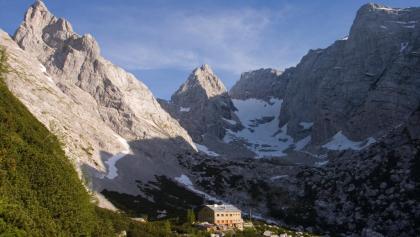 For those who enjoy an active vacation, we have lots of suggestions in Germany. Use our Travel Guide as a source of ... 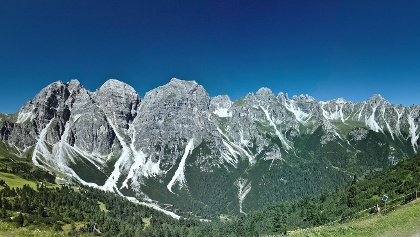 For those who enjoy an active vacation, we have lots of suggestions in Stubaital. Use our Travel Guide as a source of ...

Show map with alpine climbing routes
You start early in the morning with your climbing partner to climb the wall. There are several pitches waiting for you. Once you reach the foot of the wall, you get dressed: climbing harness, helmet, climbing shoes, exes, carabiners, slings and chalk bags. You are ready to go. The leader starts the first pitch. You will turn over and take turns with the guide from pitch to pitch. You climb higher and higher, under your feet it gets more and more airy. After a few hours you have made it, you stand on the summit having made the great ascent, the great panorama of the surrounding mountains is truly spectacular.

What is alpine climbing?

In contrast to sport climbing, the goal of alpine climbing is to climb a whole wall over several pitches and in the end, at best, even to stand on a mountain peak. Usually you climb with your rope partner with two half ropes rolled over from belaystation to belaystation. The lead climber climbs the first rope length ahead, then comes to the belaystation (at best two bolts, sometimes there is only one bolt, several mobile securing devices must be attached, a tree or a rock head), which he usually builds at 2 fixed points. He then pulls the rope in until the rope stops at the two figure-of-eight knots in the belay of the descending climber.

And so you climb on from pitch to pitch. This is a very useful and cooperative way of climbing, because the first climber can always rest at the belaystation for two rope lengths, while the second climber climbs the next rope length. It is of course also possible that only one climber climbs and leads the entire route, for example if the partner is weaker or simply doesn't dare to lead because the hook distances are too far.

Trust is the Alpha and Omega

Especially when it comes to alpine climbing, trusting your rope partner plays an important role, because you have to be able to rely on your partner at all times.

When the trust is there after a few tours together, you will quickly notice how safely and quickly you can climb through walls.

Besides trust, you will also get moral support from your rope partner. Words of encouragement can make the difference.

If you enter routes that are plausibly secured (belays drilled, all necessary bolts available), you do not need any additional, mobile safety devices. However, if you start on more alpine routes, mobile securing devices such as friends, nuts and slings are indispensable, sometimes even a hammer and pegs are needed.

Benefit from Exclusive Offers from our Partners

As a Pro and Pro+ member not only do you have access to additional features and the best maps at your disposal, but you can also benefit from exclusive offers from our partners, ensuring you are always fully equipped for the outdoors!